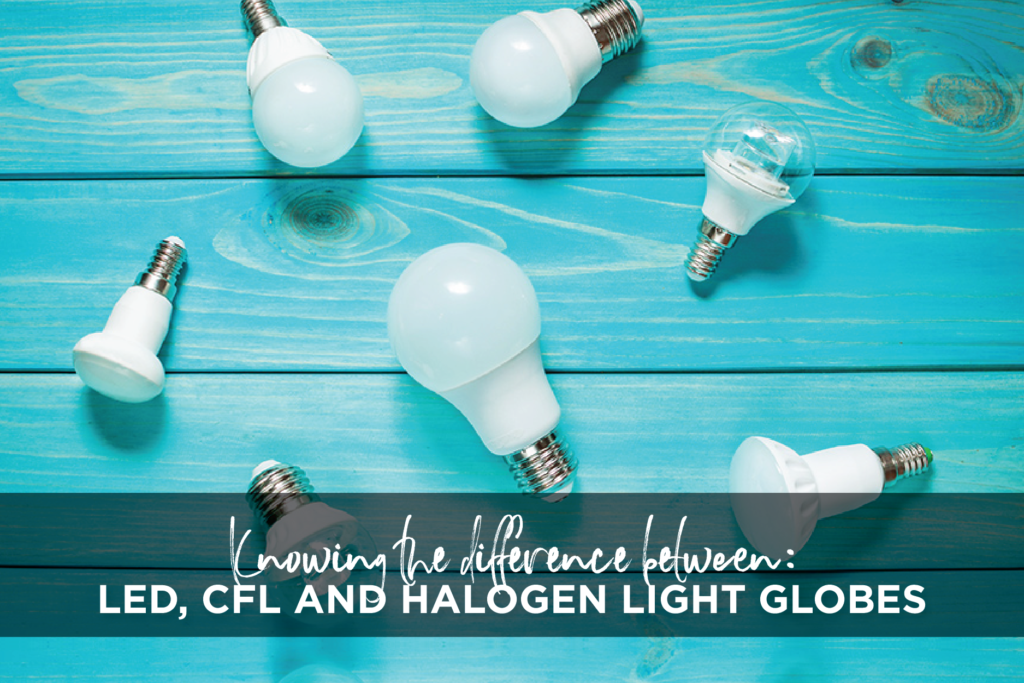 LED VS CFL VS Halogen. Which Light is most Cost and Energy Efficient?

Light globes come in many shapes and sizes, from the humble incandescent bulb to modern and efficient Light Emitting Diodes (LEDs). What you probably didn’t know is that there are marked differences in the lifespan and efficiency of different globe types. Cheaper isn’t always better, and knowing the differences can save you time and energy in the long run. 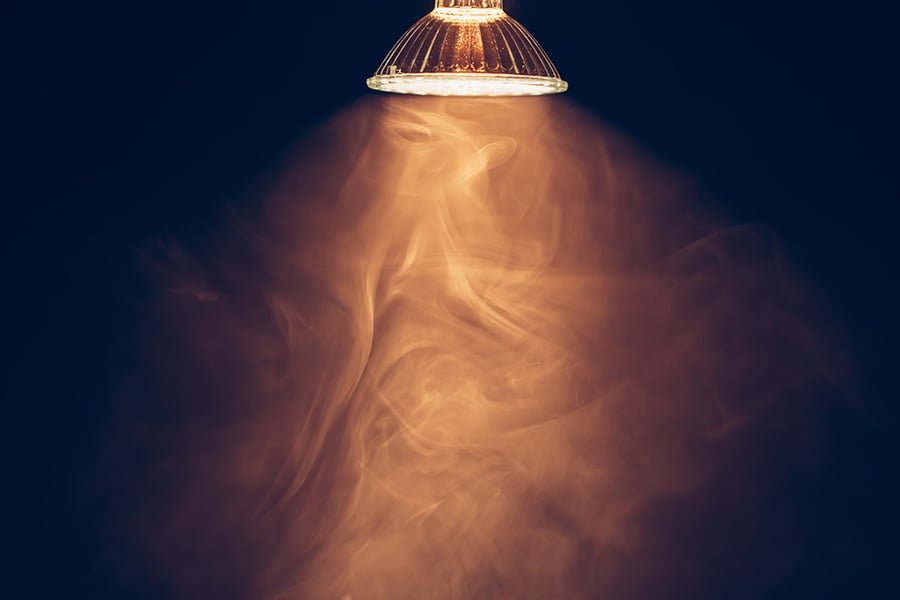 Incandescent lights go back to the 1800s and the famous American inventor Thomas Edison. They are the original type of electrical lighting solution. Incandescents work by heating a filament wire inside the lamp, using an electric current. The glow from the wire provides the light source. Unfortunately, they also provide a lot of heat.

Incandescent lamps are filled with an inert gas that helps stop the heated filament from evaporating too quickly. In traditional incandescent globes, this gas is usually argon. Halogen incandescent lamps use an halogen elements like iodine or bromine for the gas, combined with a filament made from tungsten.

The main problem with Incandescent lights, be they halogen or otherwise, is that the light comes from heating a filament wire. This means almost all the energy (90-95%) is converted to heat, rather than light. The energy is wasted, and in volume can create excess heat around the home or office.

Incandescent globes might be inefficient compared to some of the other options, but their prevalence over the past two centuries means they are cheap and easy to produce. However, halogen and Incandescent lights are slowly being phased out in most situations. Due to their short lifespan and wasted electricity, they represent a poor choice for lighting around the home, and should only be used when other options aren’t suitable. 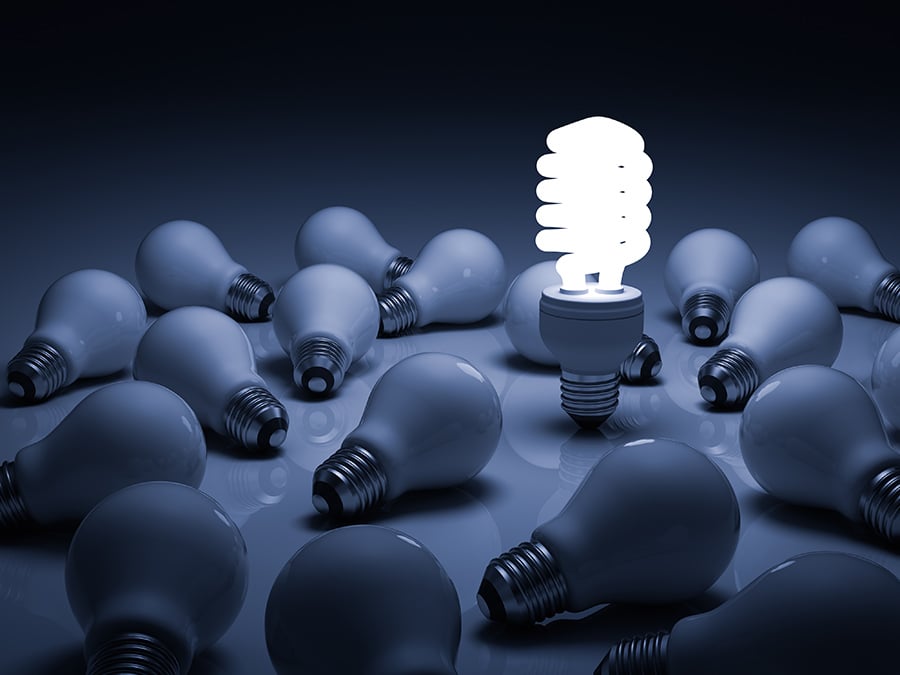 Compact Fluorescent Lights (CFLs) once had a reputation of providing harsh, unflattering light with the occasional flicker. The technology that goes into manufacturing CFL’s has improved greatly over recent years, and they now boast a life of about 10,000 hours. Compact Fluorescents also use about 80% less energy than an incandescent of equivalent power, despite only costing around a dollar more.

CFLs work through a combination of argon gas, phosphor and particles of mercury. When the light switch is turned on, electricity causes the gas to combine with the particles of mercury. The result is ultraviolet light. UV is invisible to the human eye, however, which is where the white phosphor comes in. Coated around the bulb, when the UV light makes contact, the white phosphor ‘fluoresces’, emitting white light.

You may recall that in the early days of CFL lighting there was a propensity for fluorescent lights to flicker. Circuitry inside the bulb now prevents that flickering from happening. CFLs also have a much higher lumen output to to watt power consumed, with some globes exceeding 100 lumens per watt, compared to incandescents, which are around 16.

While fluorescent lights have a longer life than halogens and incandescent lighting, the manufacture of CFLs is less than environmentally-friendly. Mercury is a toxic element, making them dangerous to dispose of. Tubes of fluorescent lighting can contain up to 15mg of mercury, enough to poison 30,000 litres of drinking water.

CFLs also take a short amount of time to ‘warm up’ and show their full brightness, so they’re less than perfect for areas that need immediate and bright light (like stairwells). They also can’t be used with dimmer switches. 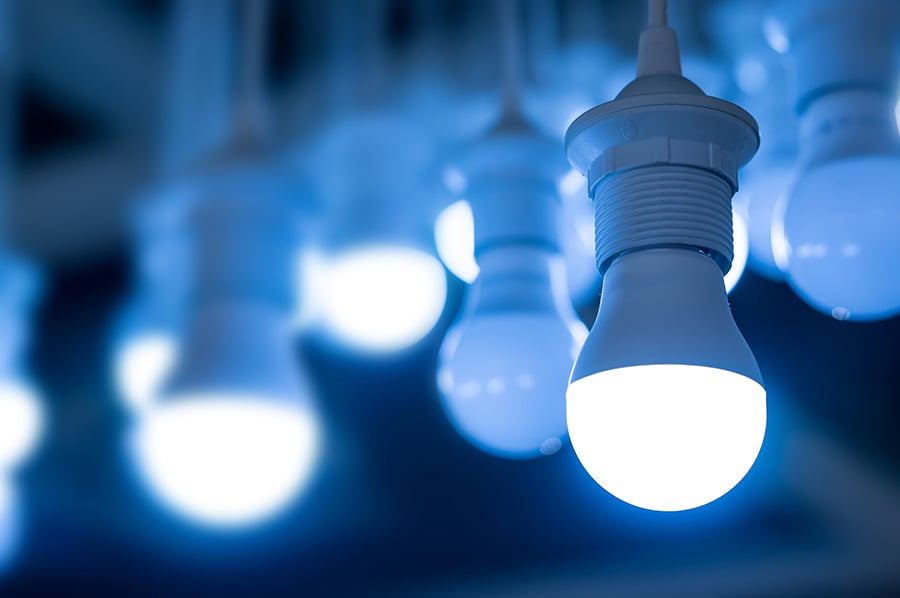 For a few years now, LED lights have promised to revolutionise household and office lighting. LEDs work by connecting a positive and negative current through a semiconductor to create energy released in the form of light. LED diodes are highly compact, making them useful in small places, and they have a similar rating of about 90 lumen per watt hour. It’s also easy to change their colour.

An LED’s real worth is in its last-ability, with bulbs lasting between 20,000 and 50,000 hours. With CFLs running for maximum of 10,000 hours, that puts LEDs up to 5 times longer-lasting than the competition. LEDs are also unaffected by frequent turning off and on, which can affect some other globes.

LEDs have a small heat signature, meaning they much more efficient than incandescent globes, but they do have their downsides, including sensitivity to voltage, thermal dependence (they need an effective cooling sink) and are very direct in their lighting signature.

Not too long ago, LEDs were considerably more expensive than other lighting options, with as much as $50 to $100 per globe. In recent years, technology has improved the manufacturing process, and we now see LEDs priced at around $8.

Buying for the long term

While LED globe prices are dropping fast, they’re still more expensive than their CFL counterparts, so at least in the store there’s an incentive to buy CFLs or incandescents over LED. However, over the long term, not only are LED's safer and easier to dispose of, but they use less electricity, last longer, and over the long term, are simply cheaper to buy.

This Australian government energy lighting chart has an easy-to-understand table that charts the various pros and cons of each globe over a 10,000+ hour lifespan. A single LED light would last the entire lifespan (and more), while you would need to change an incandescent light around 21 times, and a CFL at least three times. The Simple Dollar website has an easy-to-understand table that charts the total operating cost (including purchase and electricity) comes in at $38 for the LED, $48 for the CLFs, and a whopping $201 for the Incandescent globes.

Given the benefits of LEDs, there isn’t much of a reason to choose other globes unless absolutely necessary. That said, knowing the limitations of LEDs will help greatly in planning out the lighting structure in your home or office.

If you'd like to find out more about how to reduce your cost of powering your lighting, talk to our expert Ecosmart Electricians who can help you with energy efficiency in the home, contact us today or request a professional energy Audit.

You can also do it yourself with our free tool:

Check out our ultimate guide to a DIY home energy audit.

12 Reasons Why to Consider Switching to LED Lights?

When it comes to lighting your office, storefront, or home, LED lights are the most cost-effective...
Read More

Replacing Light Bulbs to Improve Energy Efficiency and Save Money: A Step-by-Step Guide.

How To Avoid 4 Common Electrical Dangers in Your Pool Area

Electric shock in the water is a danger that you can’t hear or see. Electrical dangers in and...
Read More
×